PolyKahr
My name is PolyKahr and I am a grumpy old man. I have seen individual rights sharply decline over the years I have been on this planet. I wonder what will be left when my grand daughter comes of age. More than anything, I want to turn back the clock. I want to leave this earth knowing that individual liberty has been restored, and that she can live her lifetime in freedom.

Another Power Grab, This Time by the FCC 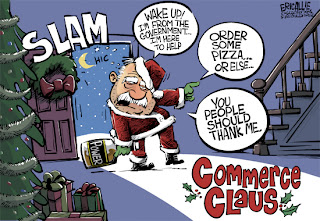 Image from Theo Sparks
According to The Blaze, the FCC by 3-2, voted to regulate the internet via Net Neutrality. This is another power grab, over Christmas week no less, by an out of control Federal Agency.  Indeed, the timing tells you everything.  They are hoping that if they do this now, nobody will notice.

Meanwhile, the GOP is posturing to stop the FCC from implementing any rules, and Verizon has threatened a lawsuit.

My biggest concern at the moment with this, as with the BATFE and the EPA is that these executive agencies are making laws.  The making of law under the Constitution rests solely in the legislative branch, the House and the Senate.  Congress has granted, unwisely I think, certain rule making authority to these agencies under certain specified conditions.  But Net Neutrality is outside the scope of that authority.  Congress drafted legislation on Net Neutrality, but never passed it.  In the case of the EPA, carbon dioxide is not even a pollutant, but a naturally occurring gas in the atmosphere.  What these examples represent are attempts by the Administration, led in this case by Cass Sunstein, at full blown dictatorship.  They are testing the waters, to see what they can get away with.  If they can get away with pulling these things off, Congress will largely become irrelevant.  Of course, there will still be a Congress, and we will still vote for the Congressional candidates, but more and more law will be made by dictate.  The Congress will serve mainly to ratify executive branch decisions, and as a side show to distract the American people.

The GOP will have to recognize this power grab for what it is, and smack down the FCC hard.  Perhaps taking it apart and handing its various tasks to other agencies might be enough.  I am not certain anything less will do.  But the American people will have to rise up and say, in the words of Mike Vanderboegh "Oh, Hell No!"

Update:  A hat tip to David Codrea at the War on Guns for pointing me to this article by John Fund in the Wall Street Journal. Fund says that a group of left wing foundations virtually made up the "problem" Net Neutrality is supposed to solve, did the research that the FCC relied on, and got their own people on the FCC to vote for it.  So, 3 people, sitting in a room, have decided for 300 million, with little debate, what the law will be.
Posted by PolyKahr at 6:16 AM